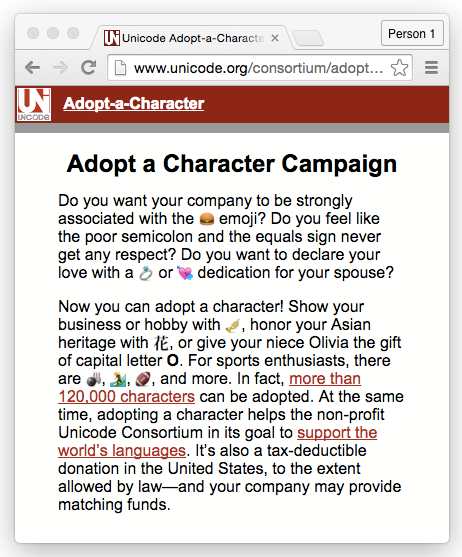 What’s Unicode? And how does it relate to Emojis?

Unicode is a character set standard that allows people to digitally communicate in a variety of international languages. Unicode supports Western alphabets of course, but also Chinese characters, Hebrew, and nearly every single language in modern use.  Additionally, the Unicode standard includes emojis.  Now, to be clear, Apple, Google, and other companies design the look of emojis on their devices, but Unicode allows these emojis to have a standard underlying character code so that sending an emoji from an IPhone to an Android works (of course it will only work if both devices support the Unicode standard and implement some sort of visual for that particular character).

How to Adopt an Emoji

The Unicode Consortium, which sets the Unicode standard, recently launched a new program to Adopt a Character! Technically this character need not be an emoji, but unsurprisingly emoji are the most popular. There are three levels at which you can adopt an Emoji  (or character) – Bronze, Silver, and Gold:

So what will the Unicode Consortium do with the money they raise? In short, help improve Unicode and its support.  Here’s a quote from a Wired.com article, Why Unicode Is Putting Its Emoji Up for Adoption, with more information:

“The funding we’re looking for goes into two buckets,” says Unicode president and co-founder Mark Davis, who also serves as Google’s Chief International Architect. Bucket one, he says, is encoding more historical scripts—like Egyptian hieroglyphs—so they can be digitally preserved. “The second bucket is providing better language support,” Davis explains. “There is certain core information that is needed for a computer to support a language, and that’s the data in the CLDR project.”

So what are you waiting for? Adopt an emoji with the links below!

Form to Adopt a Character
List of Character Adopters